Mobiles today are increasingly becoming an integral part of our day-to-day lives. However, there are large numbers of legal ramifications for using mobile phones.

A book entitled “Mobile Law” has recently been written by Mr. Pavan Duggal, Advocate, Supreme Court of India. Mr. Pavan Duggal is an internationally renowned expert in Cyberlaw, having done pioneering work in the area of Mobile Law. He has been associated with the Ministry of Communication and Information Technology, Government of India on Cyberlaw and Electronic Governance legal issues. He has been recognised as a global expert in the area of expertise, and is a prolific writer, speaker and author, having authored 6 books apart from “Mobile Law”. Pavan Duggal is widely recognised for his contribution in the evolution of jurisprudence around Cyberlaw and technology law.

The treatise mobile law book by Pavan Duggal is the first comprehensive step in the development and evolution of jurisprudence around the area of mobile law.The book mobile law is the first book of its kind in its specialised category across the world. The said book has explored various hitherto unexplored areas of Jurisprudence around the use of mobiles, cell phones, smart phones, personal digital assistants and all other kinds of communication devices, which are used to communicate in audio, video, image or text of any kind whatsoever. The said book is an exhaustive commentary on almost all legal aspects that govern use of mobiles and communication devices. The Book discusses primarily about to the newly emerging discipline of mobile law. In the said function all speakers were unanimous that there is the need for effectively regulating misuse of mobiles in such a manner so as to ensure that genuine and consumers and users of mobile phones and mobile devices are appropriately protected, and that there is a need for having in place adequate safeguards and the provisions against misuse of mobiles and other communication devices. 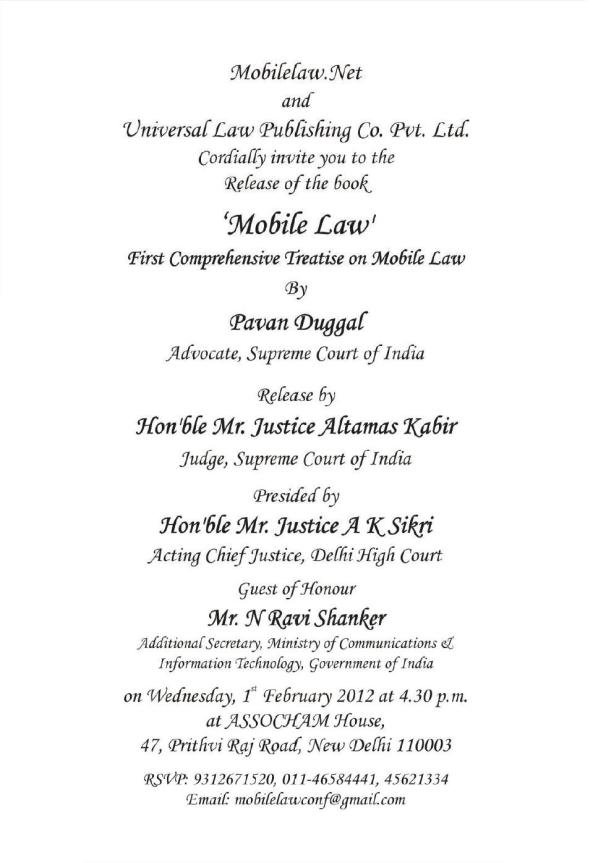